Cadets are expected to attend mandatory activities. If they do not attend and are not excused, they will be noted as absent. This will count against the cadet when consideration is given for promotions, awards, appointments, and summer training. There is a certain level of attendance (60%) that must be maintained for these activities in order to progress in the program.

If you would like to know when any of these activities are happening please consult our Calendar located here.

As 107 Squadron only receives a portion of its funding from the government cadets are highly encouraged to participate in fundraising activities to ensure all activities can happen. Cadets receive points toward extra trips and other optional activities.

A description of the activities is provided here.

Cadets can choose whether or not to attend optional activites. Attendance is kept for these activities, however choosing not to attend does not count against the cadet. Of course, the more a cadet is involved with the squadron, and is meeting expectations, will count towards promotions, awards, appointments, and summer training. 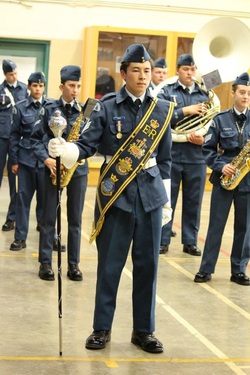 
The 107 Spitfire Band plays during Commanding Officer's Parades held once a month, and at other ceremonial parades. All cadets are welcome to join whether they know an instrument or are new to it.  The band practices once a week and band members can participate in a number of activities including Music Level Testing, Music Concentrations and an opportunity to try out for the North West Region Honour Band. 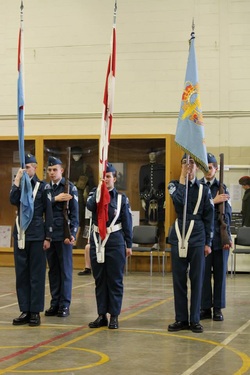 
The Squadron Flag Party carries the flags at all formal parades that the squadron participates in. The Guard is the escort to the flags and carry ceremonial, non-operational drill rifles. Practices for both the Guard and the Flag Party are held once a week. Practices are open to all cadets who wish to learn more complex drill movements. 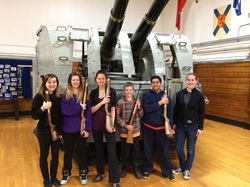 In the Air Cadet Marksmanship Program, cadets get the opportunity to learn how to safely use the Daisy 853C air rifle.  During the training year, 107 Spitfire Squadron holds multiple range nights where all cadets learn about safe rifle handling and the prone, standing, and kneeling shooting positions.

Almost every year, 107 Spitfire fields competitors to the Stage III competition, and in 2015 had a cadet compete at the Stage IV National Competition! 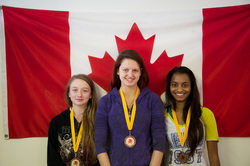 
107 Spitfire’s biathlon program has a long history of success, most recently having sent six competitive cadet biathletes to the Cadet Provincial Championship in February 2015. The program is currently coached by 2Lt Natasha Boyes, assisted by Capt. Blaine Beaven, both national level biathletes in their adolescence.

Practices run various times throughout the week, and are indicated in the online calendar.

Fall biathlon consists of running outdoors and firing Daisy 853C air rifles in a 10m indoor range, whereas winter biathlon consists of cross-country skiing and shooting .22 calibre rifles in a 50m outdoor biathlon range. All skiing equipment and rifles are supplied by the cadet program, however cadets are encouraged to use their personal skiing equipment if they have any. The program is open to all cadets, no previous experience is required! All skills involved in running, shooting, and cross-country skiing will be taught by the coach and we have many new biathletes every season. Cadets who attend practices in September and October may be selected by the coach as 1 of 8 biathletes to compete at the one-day regional competition. At the regional competition the cadets compete to advance to the two-day provincial championship. The regional competition is a run and shoot format and the provincial competition reflects the Olympic sport of biathlon as a ski and shoot format. 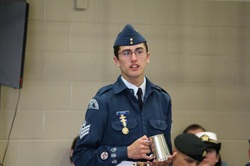 
The Effective Speaking Competition is run by the Air Cadet League of Canada. In this activity, participating cadets write a 5-6 minute prepared speech on one of the topics that the League releases each year.  After this speech is presented at the competition, the cadets do an impromptu speech.  For this part of the event, the judges create a topic at the competition and, after hearing the topic, competitors are given 3 minutes to prepare a 2-3 minute speech on the subject they just received.  Both speeches are marked by a panel of judges, and the competitor with the highest score wins the competition.  The list of prepared speech topics and the rules for the competition itself can be viewed on the Air Cadet League of Canada website.  The Effective Speaking Competition is not a mandatory cadet activity, but it’s a lot of fun and a great experience!

For a list of all practices for optional activities please consult the calendar located here.
Powered by